Still on a Mission: Inside the DOD’s Warrior Games (via Men’s Health)

Men’s Health — Strength comes in many forms, and they’re all on display at the Warrior Games, an annual event organized by the U.S. Department of Defense for injured service members and veterans. About 250 men and women battle it out in wheelchair basketball, sitting volleyball, swimming, and track and field—for starters. The competition is fiery, the camaraderie intense. It’s about more than winning or never quitting, although the competitors show those qualities. “Combat vets don’t like to get mushy, so we call it brotherhood,” says retired Army Sgt. David Iuli. “But it’s all love.”

See the pictures at Men’s Health.

Men’s Health — NFL players are generally associated with reading about as much as they are skin moisturizers and Sarah McLachlan albums, which is part of what makes the Andrew Luck Book Club such an odd little slice of nerd-joy in Indianapolis.

As the post-Peyton quarterback for the Colts, Luck has carved a reputation for being three things: 1. Rich (he signed a $140 million contract in June 2015, the biggest in NFL history), 2. Reliable (his stoic work ethic is pleasingly Midwestern) and 3. Dorky.The Stanford grad has been called the Colts’ unofficial librarian; his club is an extension of his propensity for gifting books to teammates and coaches. (Think of another NFL QB who’s on record as being super-into The Lion, the Witch and the Wardrobe. We’ll wait.)

But the man makes $140 million throwing balls around, so he’s clearly onto something. And so, driven by Luck’s suggestion, I formed my own offshoot club, called three friends to participate (most common answer: “Huh?”) and got down to reading. 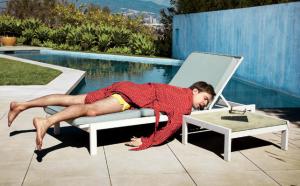 Men’s Health — When Ed Helms talks about the “jelly center” of the characters he plays on TV and in movies, he’s referring to the goodness at their core. By all outward appearances, these are not fully formed men. Some are downright mean, the sorts of jerks you’d avoid in real life. On The Daily Show, Helms played, in his words, “a character who’s kind of a dick who also has my name. Then he was the volatile man-child Andy Bernard onThe Office, the spineless dentist Stu Price in the Hangover movies, and the overwound Pat in Jeff Who Lives at Home.

In Helms’s hands, these guys become something unexpected: relatable, authentic, jelly-centered human beings. Even cowards and assholes are human deep inside, and that’s enough to warm Ed Helms’s heart.

“I have so much empathy for these characters,” he says. “I’ve tossed a couple hand grenades in my life, and I’ve paid the price. So I sympathize with somebody who’s trying to be a better person but isn’t really good at it. There’s some of that in a lot of us.”

Read more in the June issue of  Men’s Health.

Kenny Chesney: He Works Hard So You Can Relax (Men’s Health)

Men’s Health — ONE OF KENNY CHESNEY’S BREEZIEST songs has the comforting title “Be As You Are.” It’s basically what would happen if you folded up the island of St. John and slipped it into a cassette deck—an acoustic carpe diem about finding an idyllic Caribbean harbor within yourself. This is a nice sentiment, and elements of Chesney’s life mirror the song. He spends an enviable amount of time in the tropics, and even when landlocked he seems to fully embody life in paradise. No man is an island? Tell that to Chesney.

On his epic summer tours, he creates a tiki-bar atmosphere on football fields in places like Indianapolis and Kansas City. He makes 50,000 people think they’re at a tin-roofed beachside canteen that seats nine. He preaches simplicity and oceanside afternoons in songs that hit a demographic sweet spot: folks young enough to feel free and old enough to reminisce about easier times. This recipe has made Chesney really, really popular.

Men’s Health — It’s a warm southern California morning, and I’m meeting Zac Efron in Studio City at a place called Weddington Golf & Tennis. With a name that stuffy, I expect marble and money. The course turns out to be public, with a plastic-cup snack bar where a waitress, without looking up, informs the 24-year-old movie star that she doesn’t take credit cards. They’ve reserved us a private tee, which is approximately 4 feet away from the adjacent public one.

Here at the practice range, Efron—in T-shirt, oversized cap, shorts, and Vans—strolls around in disarming anonymity, though to be fair, it’s hard for even the preeminent teen pinup of the 2000s to attract notice in a crowd that includes this many codgers in lavender pants. After talking and meandering (not especially well) through a bucket of golfballs, we encounter Roger Dunn, a California golf-shop magnate who gives lessons wearing a Panama hat and smoky sunglasses. We’d heard that Dunn is just shy of his 50th year of teaching, and he’s been introduced to us as a man of considerable local repute. Mostly Dunn has something to teach, and Efron is drawn to that.