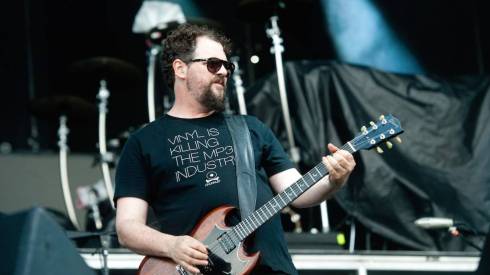 Live Nation TV — The banner men of southern rock Drive-By Truckers just released a marquee live album this fall. The deluxe version of It’s Great To Be Alive runs three-plus-hours, and comes packaged as a 3-CD behemoth (or 5-LP, if you prefer your behemothing more analog) that includes 35 songs drawn band over the last two decades. And even though the band has played over 2,000 shows since they formed in 1996, co-founder Patterson Hood feels that now’s the perfect time to document it.

“We’re glad people seem to be excited. You never know when it could be, ‘Ugh, these guys again,'” laughs Hood, calling from his new home base in Portland, where he and his family moved this year.

It’s Great To Be Alive, recorded last fall over three nights at the Fillmore in San Francisco, was designed to approximate the loose, rambling feel of one of those 2,000 shows. (A one-disc best-of version titled This Weekend’s the Night! is coming, too.) The band never actually operates with a setlist, so they cull from all corners of their sprawling catalog, from a pre-Truckers track called “Runaway Train” to material from last year’s sterling English Oceans.

“We wanted it to be like an ultimate playlist, from our point of view and the fans’,” Hood said. “I had so much fun getting all geeky about that shit.” Here’s what they came up with.