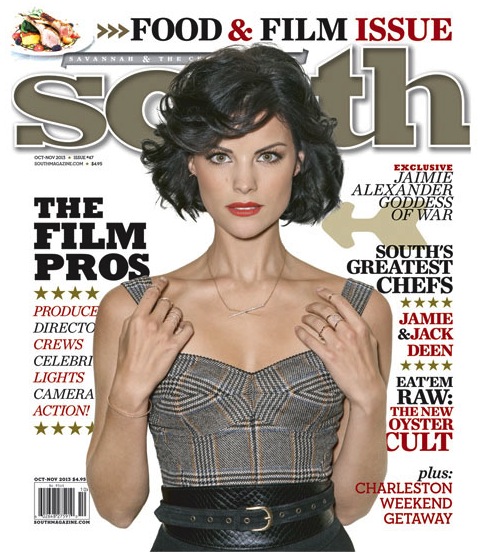 The South Magazine — If you come across actress Jaimie Alexander on the movie or TV screen, chances are good she’s winning in a fight.

The Greenville, South Carolina, native appears as the warrior-goddess Sif in the first Thor movie and sequel, Thor: The Dark World, due in November. (That would be her in the trailer battling stone-monsters alongside Chris Hemsworth and holding a sword to the throat of Tom Hiddleston’s evil, awesome demigod, Loki.) This past January she starred with former politician Arnold Schwarzenegger in the throwback action film, The Last Stand.  She appeared for two seasons on the cult ABC sci-fi series Kyle XY with cool superhuman powers.

For the first Thor movie she even got an extreme close-up teaser poster of her face, overlaid with the text “THE GODDESS OF WAR.” And sometimes she gets involved in sword accidents. “I love doing the stunts, but they can be dangerous, like when I accidentally hit someone in the face with a sword,” she says. “Luckily he had a lot of padding, so it didn’t hurt that badly.” We’ll pause here to let you think about the last time you came home from work after hitting someone in the face with a sword, just not that badly.

Read more in the new issue of South magazine.