Indy Star — If you’re a fan of beach-country megalith Luke Bryan, you are in the right state. This weekend, Bryan plays back-to-back nights at the Klipsch Music Center, the only act pulling a double-shot there this summer. In October, he’ll bring his eighth annual Farm Tour back to picturesque Spangler Farms near Fort Wayne. All told, in the next three months, Bryan will play to something like 65,000 people in Indiana, after having done basically the same thing last year. (If you’re counting, he also performed in Evansville in February.)

Of all the seat-fillers (and shakers) in country, Bryan is one of the most astonishingly reliable; he and Kenny Chesney could easily spend an evening comparing stadium-show statistics. But for all his success singing of the party life, there are hints of change: Bryan retired his series of annual beer-splashed Spring Break concerts and EPs last year, which was both cause for sadness among his Coppertone-and-bikini-topped fans and probably a solid idea, as — let’s be honest — he’s knocking on 40, married to his high-school sweetheart and raising three kids.

More from one of country’s most reliable draws at the Indy Star.

Kenny Chesney: How the Fittest Man in Country Stays That Way (via GQ)

GQ — Kenny Chesney’s songs may be about whiling away his days in sun-baked margaritavilles, but his own summers are frenetic. That’s because, in 2016, the list of male pop stars who can routinely sell out stadiums pretty much begins and ends with him. Last summer he played to 55,000 at the Rose Bowl (in its first-ever country show), 58,000 at MetLife Stadium and 54,000 at Mile High Stadium; he sold out his 12th and 13th nights at Gillette Stadium and broke his own records at Heinz Field, Lambeau, Lincoln Financial Field in Philly, and Arrowhead Stadium in Kansas City. And these aren’t ballad-heavy evenings; they’re two-plus hours of relentlessly carbonated pop-country, punctuated by sprinting and jumping and hat-flipping.

Chesney may sing about boats, beaches and Barbados, but his health ethic is dead serious—especially for a guy who grew up in Tennessee, a place not particularly noted for its judicious approach to portion sizes. Today, at 47, it’s still paying dividends.

Check it out here.

Kenny Chesney: He Works Hard So You Can Relax (Men’s Health)

Men’s Health — ONE OF KENNY CHESNEY’S BREEZIEST songs has the comforting title “Be As You Are.” It’s basically what would happen if you folded up the island of St. John and slipped it into a cassette deck—an acoustic carpe diem about finding an idyllic Caribbean harbor within yourself. This is a nice sentiment, and elements of Chesney’s life mirror the song. He spends an enviable amount of time in the tropics, and even when landlocked he seems to fully embody life in paradise. No man is an island? Tell that to Chesney.

On his epic summer tours, he creates a tiki-bar atmosphere on football fields in places like Indianapolis and Kansas City. He makes 50,000 people think they’re at a tin-roofed beachside canteen that seats nine. He preaches simplicity and oceanside afternoons in songs that hit a demographic sweet spot: folks young enough to feel free and old enough to reminisce about easier times. This recipe has made Chesney really, really popular.

Interview — Mac McAnally: Buffett’s sideman has some stories he could tell 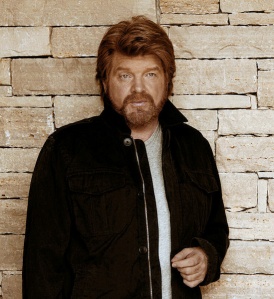 With a massive helmet of Hagar the Horrible-thick hair, dry-rubbed Southern wit and considerable tallness, McAnally does not exactly fit into the Caribbean-escapist vibe conjured up by Buffett’s beach blanket blowouts.

But since the 1990s, the Mississippi native has served as Buffett’s onstage counterpoint, guitarist and producing and writing partner. (He also has, during performances of “It’s 5 O’Clock Somewhere,” served as Alan Jackson.)