30 years ago today, "One Shining Moment" made its debut on CBS. Here's the original version that started an incredible Tournament tradition. pic.twitter.com/NTUgfVZarW

The Loop / Golf Digest — “One Shining Moment” is not a great song, but you know that already. It’s not required to be a great song, or even a good song. Technically it’s not even required to be a song at all — the people who wrote it (a guy in a bar) and recorded it (according to canon, only Luther Vandross) needed only to lay out some sweet velvet sheets for some hardcore montage-ing. It’s ambient lighting, blithely stirring background sounds by which to recap the passingly important memories you and your TV made in the past three weeks. It’s “arguably the most famous song in sports,” according to the Wall Street Journal(betraying its anti-“Super Bowl Shuffle” bias AGAIN). But it’s also pretty much “The Touch,” a preservative-stuffed platter of Max Headroom-era cheese, and about 85% of its value derives from the fact that it reminds people of the late ‘80s, which is the sole reason anything gets made anymore anyway.

That said, can we all resolve to try real hard not to kill it?

Fan Friction: The 10 Most Memorable Moments from the IU/Purdue Rivalry (via Indianapolis Monthly) 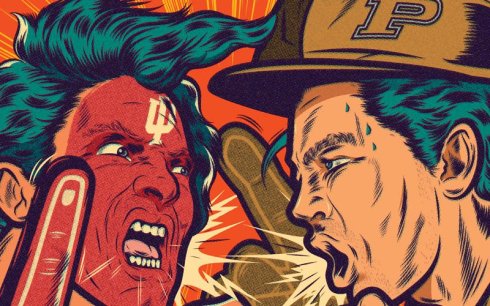 Indianapolis Monthly — Indiana basketball’s defining rivalry rekindles twice in February with two new episodes of a series Purdue currently leads by a reasonably commanding 115–89. Aaaand you know where this is going: That’s where IU people say “banners,” and Purdue people say “dusty,” and IU people mention how Purdue’s dominance was mostly before color movies, and Purdue people observe that the schools are dead even with 22 regular-season Big Ten titles each, and IU people bring up Gene Keady’s $600 comb-over, and Purdue people note how none of their coaches have ever been fired for forcefully scolding a 19-year-old. Here’s what got (and kept) the ball rolling.