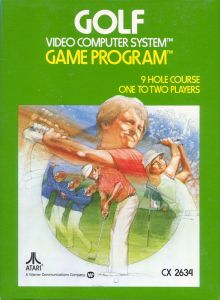 The Loop / Golf Digest — Everything was better the way it used to be, which is why you buy vinyl copies of records you already own, watch Netflix reboots en masse and apparently go to theaters to absorb five godawful, synapse-pounding Michael Bay movies vaguely based on toys you broke in 1986. The one cultural region where this aggressively nostalgic approach makes sense is video games, because if you are like some of us, you stopped upgrading/purchasing them 20 years ago, haven’t the foggiest clue how to f—king move your f—cking Boba Fett character in f—cking Star Wars Battlefront in a forward-like direction and would just rather play the games you grew up with, when life was uncomplicated, easy to master and built entirely out of 2 cm-thick squares.

Which brings us to the Atari 2600, and specifically Golf, which remains — at the risk of sounding hyperbolic — the best golf video game on the market (and by “market” I mean the ‘Antiquities and Curios’ shack behind the Cracker Barrel by the exit to 65 South). With that ridiculous premise held firmly in mind, here’s a look back at simply the best golf gameplay the early ‘80s had to offer.