Give This Man Some More Awards: A Review of Gregory Porter at the Palladium (Indianapolis Monthly) 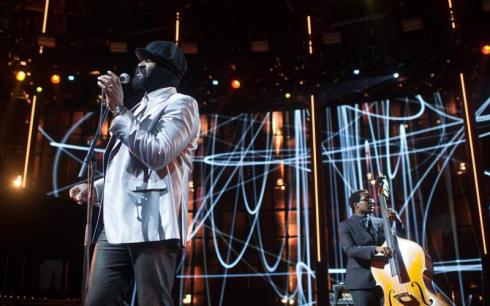 Indianapolis Monthly — Gregory Porter’s rich, sturdy baritone is filed under jazz in large part because singers have to be called something; those “genre” fields don’t fill themselves out, people.

It’s true that Porter won exceedingly deserved jazz vocal Grammys for 2017’s Take Me to the Alleyand 2014’s Liquid Spirit (and odds are pretty good on a third for his new tribute album, Nat “King” Cole and Me), all of which arrived via Blue Note. But while his big, booming voice is worthy of gold, filing it under jazz leaves out more than it lets in. Porter wields command over a vast range of genre fields, as he proved in a gleaming and diverse Saturday night set at the Palladium: Rare is the performer who can conjure Cole’s ghost, lead his own band through a steam-train version of “Papa Was a Rollin’ Stone” and close by gorgeously damning an industry complicit in “musical genocide” all in a baritone that booms as much as it comforts.

My writing has appeared in GQ, Men’s Health, Success, the Washington Post, the official BruceSpringsteen.net, Indianapolis Monthly, Billboard, Modern Bride and more. END_OF_DOCUMENT_TOKEN_TO_BE_REPLACED
This entry was posted on Monday, November 20th, 2017 at 1:46 pm and tagged with gregory porter, indianapolis, indianapolis monthly, jazz, nat king cole, review and posted in Indianapolis Monthly, music, Music Reviews. You can follow any responses to this entry through the RSS 2.0 feed.
« How to Properly Decode Your Child’s Parent-Teacher Conference (via The Loop / Golf Digest)
Thanksgiving Was Immeasurably Improved By ‘Animal Crossing: Pocket Camp’ (via The Loop / Golf Digest) »