No Phones at Concerts? Bob Dylan May Be Onto Something (via The Loop / Golf Digest) 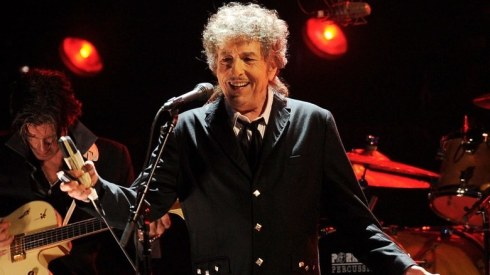 The Loop / Golf Digest — Bob Dylan did a weird thing at his concert Monday night at the IU Auditorium in Bloomington, Ind. Well, he did a ton of weird things. He did nothing but weird things. He played a mostly spoken-word version of “Tangled Up in Blue,” then warmly growled half-dozen old-timey Sinatra standards from the back of the stage while wearing a white dinner jacket. It was a curious evening, is what I’m saying. We never had this problem at Jimmy Buffett.

But the most weirdest of weird things was that Dylan issued a comprehensive cell phone ban and dispatched a surprisingly remorseless staff of IU sophomore volunteers to enforce it with the militant fire you usually only associate with students smuggling flasks of Mad Dog into football games (which actually doesn’t happen at IU, they’re just happy to have people there). These security people were ON IT. I tried to take a picture of the stage — just the stage, with nobody on it, with the house lights on — and two red-shirted valkyries descended on me like I’d just tried to jack Dylan’s trunk of bolo ties. In short, the ban worked — there was nary a telltale blue light in sight. It was impossibly odd to scan the crowd and see actual blackness, a bracingly strange moment of nostalgia, like being in a restaurant where people are smoking.

Which led us to wonder: Is Bob Dylan onto something?

My writing has appeared in GQ, Men’s Health, Success, the Washington Post, the official BruceSpringsteen.net, Indianapolis Monthly, Billboard, Modern Bride and more. END_OF_DOCUMENT_TOKEN_TO_BE_REPLACED
This entry was posted on Tuesday, October 31st, 2017 at 10:18 am and tagged with bob dylan, concerts, funny, humor, mavis staples, music, phones and posted in Culture And / Or News, Humor Columns, music, Music Writing, The Loop / Golf Digest. You can follow any responses to this entry through the RSS 2.0 feed.
« Slightly Confused Review: Bob Dylan and Mavis Staples at the IU Auditorium (via Indianapolis Monthly)
How Would Your Friends Review You? (via Success) »