The Loop / Golf Digest — Mark “Crunchy” Burgess is not the thick, beefy, Iceman-type of fighter pilot who spends his time promoting his upper-body definition and flight hours. He’s methodical and quiet — often pinpoint — in his words, manners and speech. The kind of guy to sit, arms folded, listening to a debate or a monologue or a branch-superiority battle unfold until finding the perfect moment to jump in and dismantle everything and everyone around him with precision, and physics, and the assured, unforced calm that comes with craft mastery. Crunchy has nearly 4,000 flying hours to his name. Upon my arrival at the NAS Oceana Air Base for a test flight in mid-September, my count was precisely 4,000 less. 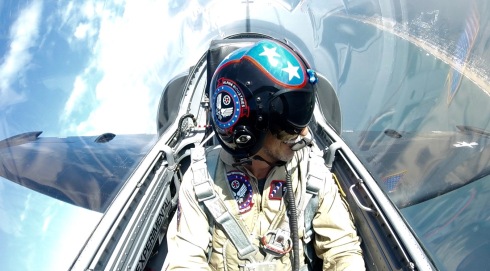 Crunchy — no one calls him anything else, and I didn’t even know how to pronounce his last name until 20 minutes before I left — is a retired Navy lieutenant commander and the lead pilot with the Warrior Flight Team, an all-volunteer charity organization that raises funds for wounded vets partly by taking hopelessly green writers up in flights that they inexplicably call “VIP rides.” (On a master jet base populated by active-duty servicemen and women, my VIP status is basically rock bottom.) My flight was a once-in-a-lifetime opportunity to spin space, to actually no-shit-for-real-aileron-roll-a-jet, to fly a fighter for about 30 exhilarating seconds. For these men and women, this was a pretty routine Friday.

The full and slightly vomitous story over at The Loop / Golf Digest.

My writing has appeared in GQ, Men’s Health, Success, the Washington Post, the official BruceSpringsteen.net, Indianapolis Monthly, Billboard, Modern Bride and more. END_OF_DOCUMENT_TOKEN_TO_BE_REPLACED
This entry was posted on Monday, September 25th, 2017 at 12:50 pm and tagged with air show, fighter jet, funny, humor, jets, L-39, NAS Oceana and posted in Feature Articles, Humor Columns, The Loop / Golf Digest. You can follow any responses to this entry through the RSS 2.0 feed.
« How to Enjoy Yourself in a Weirdly Empty Football Stadium (via The Loop / Golf Digest)
With 280 Characters, Twitter Changing the Only Thing People Like About Twitter (via The Loop / Golf Digest) »