Fidget Spinners: Making the End of America a Little More Manageable (via The Loop / Golf Digest) 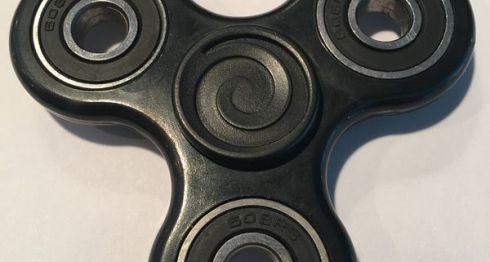 The Loop / Golf Digest — It’s a fidget spinner! You hold it and spin it around, and it spins. It’s like an adorable little propeller/ninja throwing star. You know those prizes you won for crushing 20 straight skeeball games at Celebration Station in 1987? It’s like one of those, except it’s made mostly of Rollerblade bearings, costs $32.99 and will arrive via Chinese steamer in six weeks, after which, in due time, it will end up in a crate in your damp crawlspace making friends with the Tamagotchi.

My writing has appeared in GQ, Men’s Health, Success, the Washington Post, the official BruceSpringsteen.net, Indianapolis Monthly, Billboard, Modern Bride and more. END_OF_DOCUMENT_TOKEN_TO_BE_REPLACED
This entry was posted on Thursday, May 18th, 2017 at 9:36 am and tagged with ADD, ADHD, fidget, fidget spinner, funny, humor and posted in Culture And / Or News, Dad Stories, Humor Columns, The Loop / Golf Digest. You can follow any responses to this entry through the RSS 2.0 feed.
« How to Host the Andrew Luck Book Club on a Non-$140 Million Budget (via The Loop / Golf Digest)
You Will Excuse Us Cubs Fans for Maybe Being a Little Nervous (via The Loop / Golf Digest) »