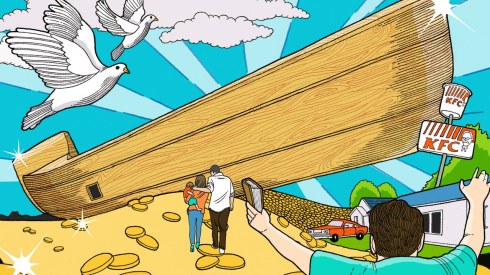 GQ — Noah’s Ark is the first left after the gas station, down the street from the Mexican restaurant.

I know going in that it’s technically called the Ark Encounter, that it’s dry-docked here in Kentucky, and that it’s the work of a creationist organization called Answers in Genesis (AiG). But given that it constitutes a $100 million boat-shaped Bible theme park and the self-proclaimed “largest timber-frame structure in the world,” I’d expected a more dramatic approach. Maybe some animatronics. At least a little traffic. Instead the thing just appears in the distance, massive and curious and facing away, as if it has already started sailing without me.

From this perspective, I can already tell that it doesn’t look a thing like the Noah’s Ark I heard about in Sunday School, which was essentially a Little Tikes pool toy that eluded the laws of physics while ferrying a floating zoo to safety during a rainstorm. As the celestially appointed sea captain, Noah was depicted as a jolly Caucasian carpenter with kind eyes and a Dumbledore beard. He carried a staff, which he used to herd the koalas and llamas, all of which were extremely huggable.

The Ark Encounter is a lot of things, but it’s not huggable. Here’s what’s going on inside the planet’s judgiest, death-iest theme park.

My writing has appeared in GQ, Men’s Health, Success, the Washington Post, the official BruceSpringsteen.net, Indianapolis Monthly, Billboard, Modern Bride and more. END_OF_DOCUMENT_TOKEN_TO_BE_REPLACED
This entry was posted on Wednesday, August 3rd, 2016 at 2:12 pm and tagged with answers in genesis, ark encounter, creation museum, gq, noah's ark and posted in Feature Articles, GQ. You can follow any responses to this entry through the RSS 2.0 feed.
« Two Days Embedded in the World’s Hottest Brickyard (via Indy Monthly)
How I Destroyed a Bruce Springsteen-Related Guinness World Record in 60 Seconds Flat (via Success Magazine) »

One response to “Inside Ark Encounter, Kentucky’s Preeminent Life-Sized Noah’s Ark (via GQ)”