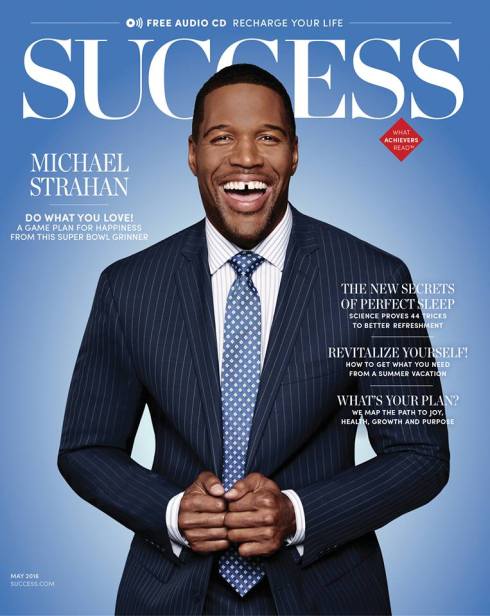 Success — In his first career, Michael Strahan was a legend.

He became one of football’s most relentless competitors, as good at bringing down quarterbacks as anyone who ever played. Week after week, he’d tear through opposing offenses like a man without fear. When he retired in 2008, after 15 years in one of the most punishing physical environments in sports, he celebrated by picking up three full-time jobs.

“To be honest, I’m looking for a few more,” Strahan says with a big Strahan laugh. “My afternoons are free.” He’s kidding. I think.

It’s 40 minutes after a Tuesday morning taping of Live with Kelly and Michael, and Strahan has chatted with Kelly Ripa about dirty martinis, interviewed actress Rebel Wilson and concocted a small buffet of Super Bowl snacks. Now he’s headed to the offices of his production company, SMAC Entertainment, where he’ll spend the rest of today. Tomorrow, he’ll be up early for a double-shot hosting Live and Good Morning America, which he joined just over a year ago. And during football season, he’ll follow GMA by flying straight to the West Coast to prep for Fox NFL Sunday, which starts before dawn and eats up all of this day of “rest.” Afterward, it’s back to New York to start the cycle again.

My writing has appeared in GQ, Men’s Health, Success, the Washington Post, the official BruceSpringsteen.net, Indianapolis Monthly, Billboard, Modern Bride and more. END_OF_DOCUMENT_TOKEN_TO_BE_REPLACED
This entry was posted on Wednesday, April 20th, 2016 at 8:52 am and tagged with good morning america, live with kelly and michael, michael strahan, new york giants, nfl, success and posted in Feature Articles, interview, Success. You can follow any responses to this entry through the RSS 2.0 feed.
« Nirvana, Indiana: What 30 Days of Meditation Does to Your Brain (via Success)
In Which the Great Frightened Rabbit Briefly Sorta Ruins My 4-Year-Old »