The Cubs Are Going to Win It All This Year, Unless That Headline Just Cursed Them Forever (via GQ) 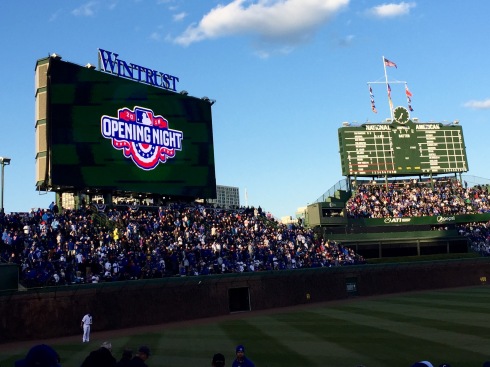 GQ — It is the weirdest feeling to walk into Wrigley Field and expect good things. This is Wrigley. Expectation doesn’t happen here. Hope, sure. Delirium, annually. Layering yourself a mental brickwork of psychological defense against a century of history, yes, as a matter of course. But when you’re sitting in the third-base grandstands and Addison Russell has just crushed a three-run homer for the lead in the eighth and the place feels like it’s going to explode it’s hard not to think one thing: Where the hell am I?

The scene inside Wrigley on a bonkers opening night.
.
.
.

My writing has appeared in GQ, Men’s Health, Success, the Washington Post, the official BruceSpringsteen.net, Indianapolis Monthly, Billboard, Modern Bride and more. END_OF_DOCUMENT_TOKEN_TO_BE_REPLACED
This entry was posted on Tuesday, April 12th, 2016 at 9:00 am and tagged with baseball, chicago, cubs, funny, humor, wrigley field and posted in GQ, Humor Columns. You can follow any responses to this entry through the RSS 2.0 feed.
« Trevor Noah Comes to Indy, Has Some Thoughts on That One Guy (via Indy Star)
That Time the Insurance Company Wrote My 3-Year-Old (via the Washington Post) »

2 responses to “The Cubs Are Going to Win It All This Year, Unless That Headline Just Cursed Them Forever (via GQ)”