Snacks of the Damned: Half the Foods on This Terrifying List Are Real (via GQ) 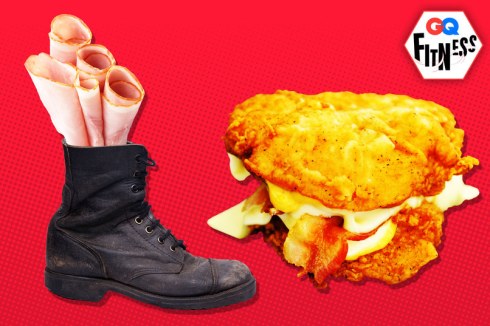 The one on the left we made up. Everything else is fair game.

GQ — So, a New York bar has created a gourmet pizza that’s topped with Cheetos; it’s a fancy blend of cavatappi pasta, Béchamel sauce, a “signature cheese blend,” and the number-one reason your video-game controllers no longer work. It looks, well, delicious—let’s not be elitists about it. But it was hardly 2015’s only curious kitchen mash-up. We’re not sure what’s up with this game of culinary one-upmanship being waged by basically every restaurant that the Omnivore’s Dilemma buzzkill might have whined about, but a lot of the results make Cheetos pizza look like an organic-kale quesadilla wrapped in Volt brochures by comparison. See if you can tell the real food-flavored objects here from the very, very fake.

My writing has appeared in GQ, Men’s Health, Success, the Washington Post, the official BruceSpringsteen.net, Indianapolis Monthly, Billboard, Modern Bride and more. END_OF_DOCUMENT_TOKEN_TO_BE_REPLACED
This entry was posted on Wednesday, December 16th, 2015 at 9:59 am and tagged with fast food, food, gq, nutrition and posted in GQ, Humor Columns, Terrible Things People Eat. You can follow any responses to this entry through the RSS 2.0 feed.
« Five Nights in the Life of the Drive-By Truckers (via Live Nation TV)
The Ultimate Indiana Bicentennial Playlist (via Indianapolis Monthly) »