Live on brucespringsteen.net: Bios and blurbs for Springsteen’s official site 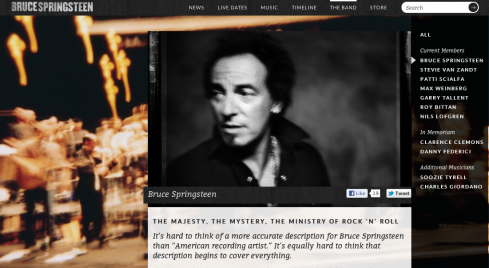 Thrilled and honored to contribute to the relaunched — and slick-looking! — official site of Bruce Springsteen, as part of a team that includes such Bruce luminaries as Chris Phillips, editor of the legendary Backstreets magazine, Caryn Rose and Glenn Radecki. The site’s a treasure box for Bruce fans and features blurbs for albums, tours and videos, which feature my contributions throughout. If you’re interested, I also wrote a handful of band bios, including those for Springsteen, Stevie Van Zandt, Nils Lofgren and Soozie Tyrell. Check it out!

My writing has appeared in GQ, Men’s Health, Success, the Washington Post, the official BruceSpringsteen.net, Indianapolis Monthly, Billboard, Modern Bride and more. END_OF_DOCUMENT_TOKEN_TO_BE_REPLACED
This entry was posted on Friday, March 9th, 2012 at 2:00 pm and tagged with bruce springsteen, e street band, music, Springsteen and posted in Feature Articles, Music Writing, Springsteen. You can follow any responses to this entry through the RSS 2.0 feed.
« Onstage and backstage with Springsteen at “Late Night With Jimmy Fallon”
Zac Efron’s full body transformation (Men’s Health) »

One response to “Live on brucespringsteen.net: Bios and blurbs for Springsteen’s official site”