Interview: Gnarls Barkley are aware of their own oddness and uniqueness. Can you dig it? 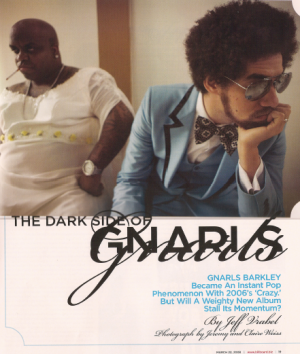 Billboard — The title of Gnarls Barkley’s sophomore record is the first, and probably last, funny thing about it.

If the band’s 2006 debut, “St. Elsewhere,” seemed to sail in from some neighboring planet — a pop disc that smeared itself with psychedelic weirdness, a vague sense of the creepy and a knockout Violent Femmes cover — the follow-up is a much trickier trip to the dark side. (“I’m not doing so good,” a serious-sounding Cee-Lo Green intones on the otherwise effervescent opening track, “Charity Case.”)

But where there’s darkness there’s light, Green says. And as Gnarls Barkley — Green’s musical partnership with Danger Mouse — prepares for the April 8 release of its highly anticipated sophomore set for Downtown/Atlantic, “The Odd Couple,” he’s making sure to keep focused on both.

“I’m very fortunate and privileged to still be relevant, to get a chance to listen back at my music in a way where it seems as if it doesn’t belong to me,” he says. “At this point it’s ours now to share. There’s a bit of vulnerability in that, although there’s also strength.”

That’s the first in a series of dualities Green will bring up in discussing “The Odd Couple,” a record that, like its predecessor, is about playing things off one another, forging matches out of seeming incongruities and continuing to scavenge around the intersection between the weird and the wondrous.

“Dark has this negative stigma attached to it,” Green says. “But my take on it is that the sun does set at some point in time every day. So it’s equal parts dark and light.”

If it takes listeners a few spins to catch on, that’s fine. “I’ve grown pretty accustomed to people watching, but not necessarily recognizing, the difference between seeing and recognizing something for what it truly is,” he says. “And I accept those terms, but by default, some of the time, there’s a part of any human being that just wants to be embraced right out of the gate.” And here Green pauses for a chuckle. “I am aware of my own oddness and uniqueness,” he says. “I can dig it.”More than its runaway hit forerunner, “The Odd Couple” prowls around that unlikely overlap between surf-pop/spy-movie sounds and new-school soul. Such tracks as “Whatever” and “Surprise” find Green pushing his ever-improving vocals into new and sinister areas. Second single “Who’s Gonna Save My Soul” might be his finest performance to date, even if it kind of makes you want to give him an ice cream or a hug. “(That) was the first song we did where we knew, ‘Wow.’ It felt magical again,” Danger Mouse says.

For his part, Danger Mouse (real name: Brian Burton) is more interested in conjuring a kind of dark-carnival soundscape, a sound much closer to “The Boogie Monster” than to megahit “Crazy.” The first single, “Run,” is probably the closest the new disc comes to the pop side, and even its chorus sounds like a plea for escape. “That song doesn’t really sound like anything else on the album,” Burton says. “But that was the same thing with ‘Crazy.'” And that worked out OK.

Indeed, in a day when bands can offer unprecedented access to their fans, Gnarls Barkley has consciously sprinted in the other direction, leaking out only choice bits, guarding against what Green and Burton see as an industry-wide tendency toward overexposure. (Last summer, Burton consented to play a track for a Billboard staffer on the condition he didn’t ask word one of a question about it.)

“The buzzword on the first record was ‘reveal,'” Downtown Records head of marketing and sales Michael Pontecorvo says. “You’ll remember there were five or six promo images, and none of them were in everyday street clothes. It went with the whole ‘Who is Gnarls Barkley?’ idea.”

The plan certainly didn’t hurt the band’s sales. “St. Elsewhere” has sold 1.3 million copies in the United States, according to Nielsen SoundScan; it peaked at No. 4 on the Billboard 200 and spent 47 weeks on the chart. “Crazy” spent seven weeks at No. 2 on the Billboard Hot 100 and crossed over to Billboard’s modern rock, R&B/hip-hop and adult contemporary charts.

Yet Green downplays the idea that he and his partner are out to foster any kind of great mystique. “We don’t really talk about the music or the concept formally,” he says. “We just have conversations — very casual ones. And what people hear this time around is our evolution, our bond and growth together as people and artists and co-workers.”

The first time around, Green believes, was the sound of him and Burton “feeling our way through it. It was truly an experiment in being the first of a kind. You can only be so certain about your intention when you’re doing that, and not as certain about the outcome. Music can always be an act of faith.”

That kind of thoughtfulness on the whole Gnarls Barkley phenomenon would seem to contrast with the band’s borderline genius idea to play one of its most high-profile early shows in full “Star Wars” regalia. Anyone who caught one of Gnarls’ live shows saw something between a concert and a costume party — the band took to the stage in guises that included characters from “The Wizard of Oz,” the cast of the “Austin Powers” movies, astronauts, hippies, tennis players and a hair metal band.

Yet Green sounds hesitant about the idea of taking Gnarls out to support “The Odd Couple.” “Believe it or not, I still can’t afford to take my entire family on the road with me,” he says. “I’m a family man, and I miss my kids and family very much, which is why I’ve never been so hot to tour. I’ve been on the road all my life. I’ve got suitcases I haven’t unpacked from last year.”

Burton concurs. “Our desire is to make another record more than anything.” But Pontecorvo hints that a tour statement will be released around the record’s release date, though it won’t be a standard trek.

“It’s an entirely different thing to walk out onstage to the love and embrace of a crowd that’s singing along with something you could have very possibly been alone in,” Green says. “And it’s about that too. It makes me able to complain a whole lot less.”

The appeal for Green — and here, perhaps, is the crux of Gnarls Barkley — is that all oddity has been thoroughly thought out and designed for enjoyment.

“It is fun, and I’m surprised that people are still as surprised as they are about it,” he says. “It’s all just good fun, man. People have got to stop taking s–t so seriously. You’ve got to go back to Alice Cooper and David Bowie and Elton John and Sly Stone — where are these individuals for us, for our generation, these wonderful images and imaginations and entities and enigmas? We need them — we need them so desperately. This is why we do what we do for our generation, to shine as a beacon of what is still possible, what is still tangible and what truly exists. We are here and now, and we take pride in that, and that’s why we have so much fun.

“Let’s face it,” he adds, “we both did notice that the album was dark, right? So we’re just trying to have fun with it, you know what I mean? A spoonful of sugar makes the medicine go down.”

My writing has appeared in GQ, Men’s Health, Success, the Washington Post, the official BruceSpringsteen.net, Indianapolis Monthly, Billboard, Modern Bride and more. END_OF_DOCUMENT_TOKEN_TO_BE_REPLACED
This entry was posted on Monday, March 17th, 2008 at 2:09 am and tagged with Billboard, gnarls barkley, interviews, music, the odd couple and posted in Billboard, Feature Articles, Interviews, Music Writing. You can follow any responses to this entry through the RSS 2.0 feed.
« Lyrics Born can go ‘Everywhere at Once’
Live review: Jimmy Buffett at the Time Warner Pavilion, Raleigh »

2 responses to “Interview: Gnarls Barkley are aware of their own oddness and uniqueness. Can you dig it?”