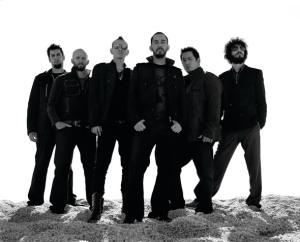 Billboard — Linkin Park‘s new midtempo rocker “What I’ve Done” may sound familiar when you hear it blaring from radios. The track, which hit multiple rock formats April 2, boasts the empassioned singing and thick wall of guitars that marked the group’s past hits. But an awful lot has changed since the last time Linkin Park graced the airwaves.

Indeed, it has been four years since “Meteora” dominated Billboard’s Modern Rock chart. The 5 million-selling monster’s track list now reads like an Idiot’s Guide to Programming a Rock Radio Station, with such No. 1s as “Somewhere I Belong,” “Faint,” “Numb,” “Lying From You” and “Breaking the Habit.” Meanwhile, the band’s debut, “Hybrid Theory,” has sold more than 9 million copies in the United States since its 2000 release, according to Nielsen SoundScan.

Now, Linkin Park is releasing “Minutes to Midnight” (May 15, Warner Bros.) into a world that has decidedly turned away from the dominant rap-metal sound of the early part of the decade.

And between the lengthy layoff, an epic recording schedule (“We’ve essentially been in a bomb shelter for 14 months,” MC Mike Shinoda says), a very public contract dispute, the changing marketplace and the involvement of a guy named Rick Rubin, a great many eyes will be watching to see how Linkin Park steps up to the challenge.

It should be noted that no one has turned away from rap-metal more than Linkin Park singer Chester Bennington.

“There’s still a hip-hop element to us, and there’ll always be,” he says. “But we’ve really moved away from anything that sounds like nu-metal. I know that we kind of helped create, I guess, the sound of that genre, but I hate that genre. I’m not going to speak for everyone, but I can personally tell you that I am not a big fan of almost everybody in that category. There are a few bands that I don’t really believe belong in there, and we’re one of those bands.”

The last many people heard from the band was when it put a self-imposed stop-work order on recording during a very public 2005 dust-up with Warner Bros. With four albums left on its deal, Linkin Park took the unusual step of publicly demanding a release from its contract during renegotiation talks and on the eve of the company’s initial public offering, saying, among other things, that it was concerned that Warner Music Group wouldn’t be able to keep up its “fiduciary responsibility” in promoting its new material.

At the time, Warner Bros. dubbed the move a publicity stunt intended to beef up the band’s position in contract negotiations, a tactic previously employed by such acts as the Dixie Chicks, Incubus and Beck.

But the separation was a short one. Less than eight months later, Linkin Park and Warner Bros. reached an agreement that furnished an estimated $15 million advance for “Minutes to Midnight” and gave the label an option for up to five more Linkin Park records. Sources say the band’s royalty rate was also upped to an estimated 20%, a high number as such things go.

Not surprisingly, the topic isn’t exactly a favorite for band or label. Warner Bros. senior VP of marketing Peter Standish had no comment, and Bennington would only say, “In some ways it worked out, in other ways it didn’t.”

Drummer Rob Bourdon adds, “As soon as we settled everything we went into the creative part and forgot about it. We never had any problems with the people we worked with at Warner on a day-to-day basis; they were all great. We wanted to make sure they were going to continue to be there for the promotion of this record.”

Plus, Shinoda says the band feels that “all pistons are firing. [Warner is] working their butts off out there, and I know we all really appreciate that. Because obviously we’re working our butts off as well.”

Actually, the band has been for a while. “Minutes” was assembled during the past year in Rubin’s Laurel Canyon, Calif., mansion; you may remember it from such albums as the Red Hot Chili Peppers’ “BloodSugarSexMagik.”

Rubin also dialed down the band’s tendency toward what Shinoda called “perfectionism,” eschewing overdubs and polishing in favor of a rawer, more live sound. Bourdon says that after spending weeks tweaking the drum production on one track, he was stunned when Rubin told him to scrap it all and use the demo version instead.

A handful of tracks played for Billboard are proof of the band’s stylistic ambitions. “Leave Out All the Rest” has an arena-ready chorus accented by drum machine beats, while “Shadow of the Day” shoots for a “With or Without You”-level ballad sure to inspire plenty of lighter-waving. Elsewhere, the six-minute-plus “The Little Things You Give Away” references a city “washed away as a nation simply stares” as multitracked a cappella voices fill the mix. Bennington gets prominent scream time on “Given Up,” which flexes the band’s more extreme sonic inklings.

“Obviously, the market being the way it is, you can’t have the kind of expectations you had four years ago. You can’t expect expectations to be going up when everything else is going down,” Shinoda says. “It doesn’t mean we put any less love into it. We feel like this record is really good, and we want people to hear it. What good is an important message if nobody hears it?”

Bennington adds, “Around Christmas of last year, I was getting impatient. Like, ‘Man, is this thing ever going to end?’ But it was definitely worth the time and energy we put into making the album.”

My writing has appeared in GQ, Men’s Health, Success, the Washington Post, the official BruceSpringsteen.net, Indianapolis Monthly, Billboard, Modern Bride and more. END_OF_DOCUMENT_TOKEN_TO_BE_REPLACED
This entry was posted on Tuesday, April 10th, 2007 at 2:35 am and tagged with chester bennington, linkin park, mike shinoda, minutes to midnight, music, rick rubin and posted in Billboard, Interviews, Music Writing. You can follow any responses to this entry through the RSS 2.0 feed.
« Interview: Grandmaster Flash, Mele Mel send Rock Hall a message
Travis, the boy with no name and “The Boy With No Name” »