Concert Review: Bruce Springsteen and the Seeger Sessions Band — What can a poor boy do but play in a ragtime band? 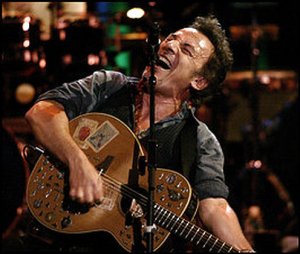 PopMatters — Nothing — absolutely nothing — about the scene at Bruce Springsteen’s concert in Indianapolis hinted that there was Bossness afoot. The crowd was smartly dressed and orderly; purple chandeliers hung on stage; and in the pit, general admission fans jockeyed politely for position. More beer stands were shuttered than open, and there wasn’t a single line for a single bathroom. On an unseasonably sticky Indy night, it was hard not to look out at the yawning green lawn (empty as it was) and think sadly: Jimmy Buffett fans are gonna stuff this entire space next month to hear him sing about cheeseburgers.

But, such is the bizarre alternate universe that has swallowed Springsteen’s strangely under-attended summer tour with the 17-member Seeger Sessions Band. Rambling along languidly in almost clandestine fashion, it may take the prize for the Worst-Pitched Concert of the Summer.

For the Hazy Davy’s sake, I’m as big a Bruce homer as they come, but I’ll admit, at first the idea of enduring a folk-powered evening of Pete Seeger songs made me want to sprint home and smooch my copy of Born in the U.S.A.. I like Bruce, and I like Pete Seeger, but when the Boss indulges his folkie leanings, the results are songs like “Nebraska” or the equally festive “The Ghost of Tom Joad.” Both tunes are perfect for curling up in an abandoned warehouse and chugging a bottle of whiskey, but that’s hardly what you want to do at a sunny amphitheatre show.

And that’s why this Seeger business is such an out-of-left-field surprise: against all odds, it’s fantastically fun. Seeger’s name is on the ticket, sure, but in Springsteen’s hands the music gets an enormous, big-band, horn-powered treatment that can only be explained with commas: gospel, blues, folk, rock, and zydeco (there is totally a washboard in the encore). All of this pours out of a tap attached to New Orleans. This is a big Big Easy show, a tribute to the flooded city. It’s Bruce born on the bayou, part mourning, part hope, part house party, part cry for rebirth — all metaphors you may remember from Every Other Thing Bruce Springsteen Has Ever Done.

In the Seeger band’s debut performance at Jazz Fest in New Orleans, the mood was understandably subdued, mournful, and respectful. Now, though, the band indulges the spirit of the city, pulling great joy from great pain. As the man slyly howled in the show’s ragged, revved-up version of “You Can Look (But You Better Not Touch)”, “What can a poor boy do but play in a ragtime band?”

To be sure, this tour involves a certain degree of trust, particularly when you’re dropping 90 bones to hear what my buddy Bradshaw rightly predicted was, “Bruce singing “Froggie Went A’Courtin.'” In fact, everything about Springsteen’s brief summer tour seems to exist in a slightly altered reality. It’s a universe where twentysomethings square dance, where “Nebraska”‘s lo-fi monotoner “Open All Night” becomes a showstopping rave-up, where an emotional high point is a venomous cover of a forgotten blues song that’s been retrofitted as an indictment of the government’s bungled response to Katrina.

Nor can I remember attending a show where the performers seemed to be having a better time. Aside from during songs about New Orleans, there was a smile on Bruce’s face the entire time. And it was with that smile that he drove his 17-piece mean machine through horn-kissed, house-rockers: “Old Dan Tucker”, “Oh Mary Don’t You Weep”, “Pay Me My Money Down”.

If Bruce approaches the E Street Band as a man with a legacy to jealously protect, he approaches the Seeger Sessions Band as a work-in-progress, a means to no particular end, a science-fair project that’s produced way better data than expected. He does it with a satisfyingly enviable glee. In Indy, he indulged a clever request from a seven-year-old fan down front who brought along a stuffed green frog. “I think we got a request!” Springsteen beamed, igniting the band’s first-ever “Froggie Went A’ Courtin'”. Bonus gag: The kid reported that his name was River. “I think I’ve got another one I can do, too,” Springsteen cracked. Zing!

But this is music that’s pure, old-timey American — a phrase that rankles Springsteen aficionados and detractors alike. Springsteen, the poor bastard, carries the torch as one of America’s greatest living rock ‘n’ roll icons. Fair or not, it’s the sort of thing that happens when you stamp your flank in front of the stars and stripes on an album that sells a million fourfillion gajillion copies. But here’s the funny thing — the album We Shall Overcome actually is the treatise on American music that the pinheaded conservative right thought Born in the U.S.A. was; it’s just as sneaky in that context as U.S.A. was sneaky outside of it.

As such, political overtones burbled to the surface throughout the show. Wartime prayers appeared in the form of the Irish tale “Mrs. McGrath”, the story of a mother whose son returns home after seven years without his legs. Of course, the showstopper was Springsteen’s refashioning of Blind Willie McTell’s “How Can a Poor Man Stand Such Times and Live?” Bruce kept the first verse and rewrote the last three to reflect Katrina: “Me and my old school pals had some mighty high times ’round here / And what happened to you poor black folks well it just ain’t fair,” he sang, recalling the infuriating scene last fall in which President Bush stood with Trent Lott and said he looked forward to partying on Lott’s soon-to-be rebuilt porch. It’s brutal discourse.

The show ended with a sweet, acoustic-based “When the Saints Go Marching In”, stripped of its horn-fueled zaniness and recast as a melancholy prayer shared by Springsteen and guitarist/vocalist Marc Anthony Thompson (who records as Chocolate Genius): “And some say that this world of trouble is the only one we’ll ever see / But I’m waiting for that morning when the new world is revealed.”

For the encore, a guy came out and, in a moment of purely Bruce-ian shtick, played dishes, bowls, and a kitchen sink…. with a spoon. “Jesus Christ, be careful,” Springsteen joked. “That’s my mother-in-law’s goddamned silverware… Patti’s gonna fucking kill me.”

A certain sense of something surrounds the E Street Band these days — not complacency necessarily , but an expectation of sheer reliability, a pretty decent bet against disappointment. It’s like a meal at the Cheesecake Factory or watching a Braves game. E Street shows in the past few years have been good, even great, but also, at times, workmanlike. And I think, truly, that Bruce fears slipping into that hazy zone of complacency. Hence, the silverware.

As such, this piece should have probably been about finding new ways to enliven one’s catalog or legacy. It should have probably used the word “reinvention” a lot and been filled with lively clichés about Neil Young. But for all this wearying talk of meanings and metaphors and the usual Springsteenian subtext of a blue-collar rock n’ roll Joe trying to save the world, I also cannot remember having had this good a time at a show. If Bruce sneaks into your town this summer, check it out. It doesn’t seem much like a Springsteen show, and that may be the best thing about it.

My writing has appeared in GQ, Men’s Health, Success, the Washington Post, the official BruceSpringsteen.net, Indianapolis Monthly, Billboard, Modern Bride and more. END_OF_DOCUMENT_TOKEN_TO_BE_REPLACED
This entry was posted on Friday, June 16th, 2006 at 1:21 pm and tagged with concert, Music Writing, review, Springsteen and posted in Music Reviews, Music Writing, PopMatters, Springsteen. You can follow any responses to this entry through the RSS 2.0 feed.
« Interview: Joan Jett puts a couple more dimes in the jukebox
Review: Dave Chappelle explains that whole thing about South Africa »

One response to “Concert Review: Bruce Springsteen and the Seeger Sessions Band — What can a poor boy do but play in a ragtime band?”