‘Electro Lounge’ and ‘This Is Jazz’: Radio dreams in Jacksonville 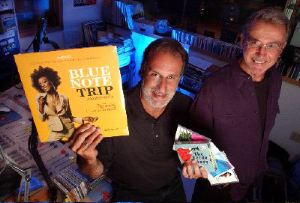 Florida Times-Union — Two things about Bob Bednar and David Luckin: They are music-loving humans, and they program their own radio shows in Jacksonville. It’s a testament to the general state of the airwaves that these things add up to an eyebrow-raising quirk of nature.

Poll music fans on their complaints about radio, and their responses tend to take on a dispiriting sameness: zero merging of musical styles, little variation of the playlists and a seemingly irrational dependence on the same four Aerosmith or Mariah Carey or bled-dry 1980s hits. A payola in- vestigation rocked the commercial FM industry this summer. Seven million people have invested in satellite radio over the past four years. According to Arbitron, commercial radio’s audience has decreased 13 per- cent during the past decade. And above all, there’s an overriding sense that the music is being programmed exclusively via mathematics.

Not so with the non-profit WJCT FM 89.9’s signature music shows, Luckin’s Electro Lounge (which airs at 9 p.m. Tuesdays-Fridays and 10 p.m. Saturdays) and Bednar’s This Is Jazz (8 p.m. Saturdays — both shows are available for streaming at wjct.org). Both are crafted by hand and steeped heavily in that fading human element.

“As we get into a marketplace that’s increasingly more competitive, with things like satellite radio and podcasting, what’s gonna keep people coming back?” said Tom Patton, WJCT’s station manager. “When you need to distinguish yourself, the only way to do that is local content.” And people respond. Patton says that over those time periods, an average of 13,000 listeners are tuned in.

And on WJCT, Bednar and Luckin are the music content. “We share a lot,” said Luckin, “Or we play Stump the Band. He usually wins.”

Ostensibly, this is not a Stump the Band that most people could hang with — each guy is fairly intimidating in his knowledge. The studio Bednar broadcasts from is efficient-looking and well-kept; a long row of jazz titles is lined along the large windowsill like it’s marching toward the microphone. Luckin’s is more crowded, stuffed with stacks of everything, including the two or three bags he uses to tote music around. “I’m still reorganizing,” he’ll say, sounding not much like it’s a project with an appreciable end to to it.

The two engage in friendly skirmishes like brothers on Christmas morning, but are also quick to praise one another. “It’s a risky show, but it’s working,” said Bednar of Luckin’s Electro Lounge. “The show exists because of him,” he added, pointing across the boards.

Bob Bednar’s ‘This Is Jazz’
As the host defines it, Bednar’s This Is Jazz, now in its 13th year, is the sound of surprise, a deft mix of classic and new, where Miles plays comfortably into Jason Moran, a true labor of love and the product of a lifetime spent close to the music.

When Bednar was a kid in the Northeast, he’d visit the Paramount to see the Woody Herman Orchestra, and for his 13th birthday, his cousin took him to Eddie Condon’s in Greenwich Village. “You talk about your heart jumping out of your shirt,” he said of that first trip. “This smoky jazz club, the music going on, the cigarette girl coming along in net stockings and high heels. Could life be any better?”

Bednar himself was a vibraphone player and drummer in the mid-’50s, when he lived in the Philadelphia area, played with guys such as Stephane Grappelli, Zoot Sims, Bucky Pizzarelli and Lou Tabackin.

“I love it from a standpoint of a historian, love it as a player,” he said.

When Bednar started 13 years ago, WJCT was primarily music — classical and jazz, even. In the mid ’90s, new management began the shift into its current NPR format, but they kept Bednar around. “I don’t cost a lot of money,” he said, probably half-kidding. (For his part, Patton demurs that it’s “financially viable” to do these shows).

“When I took the job, I said, OK, what are the parameters? And they said, ‘You do the show.'” And since then, he’s never been told how to structure it. Asked how the programming comes together, he smiles and taps his head.

But Bednar will occasionally bend rules. “I’ll take a song like Jerome Kern’s All the Things You Are, and I’ll do an entire show on 15 interpretations of it. Now who the hell does that? It’s like, ‘You wanna get fired?'”

The man has 1,500 CDs, 135 of which are by Chet Baker. Mention Miles Davis, and a 15-minute monologue on the jazz pioneer’s history comes tumbling out, a thoughtful torrent of names and phrases such as “in-credible stuff.”

Judging by the people who’ve personally offered thanks, Bednar’s audience spans students at UNF to 80-somethings in St. Augustine.

But you get the sense that this is what he’d be doing at home anyway.

“Jazz is continually evolving and changing, like all great art,” he said, “And you make a discovery like Jason Moran or Greg Osby and be able to get full pleasure as you did 40 years ago by something that Bud Powell or Sonny Rollins did …”

Bednar sits back and clasps his hands. “I don’t get very excited by this stuff,” he deadpans, smirking to whoever’s in the room and mostly himself.

David Luckin’s ‘Electro Lounge’
Luckin defines his show like this: “A while ago, I sent the show to an NPR station in Pennsylvania,” he said. “And someone e-mailed back and said, ‘I don’t know if this show knows what it wants to be.’ And guess what — that’s it! They got it, and they didn’t even know it! It’s a little bit of everything!”

The Electro Lounge, which re-launched last December from its previous incarnation as NightFlight, is loosely grounded in downtempo or chillout music. Playlists are heavy on bands such as Thievery Corporation and De-Phazz, but, especially of late, has detoured into Stevie Wonder, Michael Franti, Gang Starr and local singer-songwriter Rebec- ca Zapen. Seventy-five percent to 80 percent of the show is new music.

“I’m always looking for excuses to make a left turn,” Luckin said, adding with a laugh, “Maybe we could call it force-feeding.”

But, he added, his audience is open to such sleight of hand.

“It’s easy to play something you think everyone will like. But people are broader than they think they are,” he said. “And the odd stuff gets the biggest response — Gershwin sung by Natalie Merchant, or a trippy track that begins and ends with an opera perform- ance.”

Luckin talks fast, his brain always on, rifling through CDs when a track occurs to him and constantly putting discs in whatever player is nearest. “You gotta hear this voice,” he’ll say, or this marimba, or this old soul band.

“I’m stealing this from Bob, but it’s the element of surprise,” he said. “What I try to do is mix up Pink Floyd and Patsy Cline. Music without walls.”

Luckin stays up late each night sniffing around the Web, hitting the downtempo discussion boards, spinning the CDs he gets from all over the globe and discovering.

The result is a loyal fanbase that, judging by his e-mails, spans the country — one Philadelphia columnist wrote a piece after the Super Bowl bemoaning his city’s lack of a similar show. “This is what DJs used to do before songs came with little colored dots instructing machines to play them,” Luckin said.

The catch with Luckin’s show, as Bednar has noted, is that it’s a thematic roll of the dice.

“I hope I’m appealing to these people. And you wonder, ‘Should I play that 1932 Louis Armstrong I’m Confessin’? Will they get it?'” he said. “But you should play it, because they should hear it. And you play the Black Eyed Peas or Spearhead for the same reason.”

Luckin sits back, crosses his arms. “I just love music.” And doing what music guys do.

My writing has appeared in GQ, Men’s Health, Success, the Washington Post, the official BruceSpringsteen.net, Indianapolis Monthly, Billboard, Modern Bride and more. END_OF_DOCUMENT_TOKEN_TO_BE_REPLACED
This entry was posted on Wednesday, October 19th, 2005 at 1:53 pm and tagged with bob bednar, david luckin, electro lounge, jacksonville, this is jazz, wjct-fm and posted in Florida Times-Union, Interviews, Music Writing. You can follow any responses to this entry through the RSS 2.0 feed.
« Interview: Atmosphere’s Slug steps outside himself
Live review: Nine Inch Nails reclaim their empire of dirt in Jacksonville »

One response to “‘Electro Lounge’ and ‘This Is Jazz’: Radio dreams in Jacksonville”